FOR three years now, the Sun.Star website at www.sunstar.com.ph has been streaming live the Cebu Schools Athletic Foundation Inc. (Cesafi) basketball games in both high school and college divisions, taking the hardcourt action closer to its most avid supporters.

This year, Sun.Star further improves its capabilities to give the viewers a clearer and more comprehensive coverage of the games.

For one, a dedicated microsite (available at cesafi.sunstar.com.ph) has been created to provide up-to-date content of the Cesafi 2014 season. 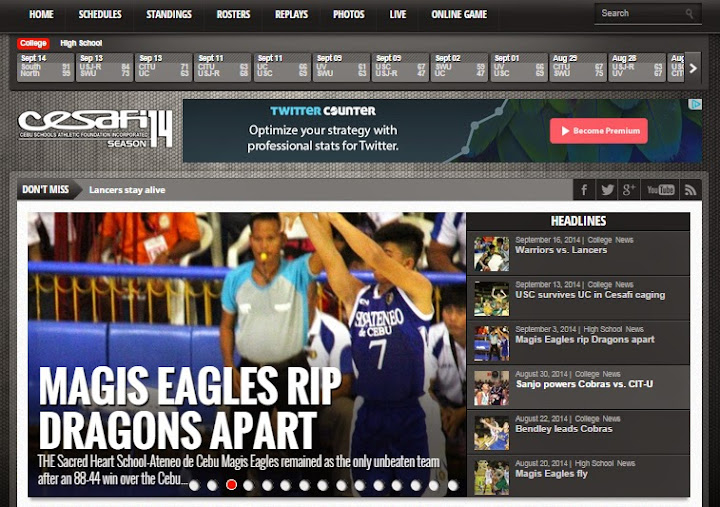 Screenshot of Cesafi microsite
The Cesafi microsite contains headlines of the games from Sun.Star Cebu's reporters, as well as columns from Sun.Star's sports columnists. It also contains photos, featured videos, and replays of the previous games. The team lineup of Cesafi's various member schools are also available in the Roster section.

A scoreboard widget at the top portion of the page provides the final scores of all the matches while a twitter widget at the right part of the site shows feeds from Cesafi fans who tweeted using the hashtag #Cesafi2014. Sun.Star also posts game updates and scores via twitter.

The microsite also contains the team standings for those who want to know whether their team is on top or struggling at the bottom, and an updated schedule is also available so that fans will not miss out on their favorite games.

The live games can be viewed at the LIVE section of the site. 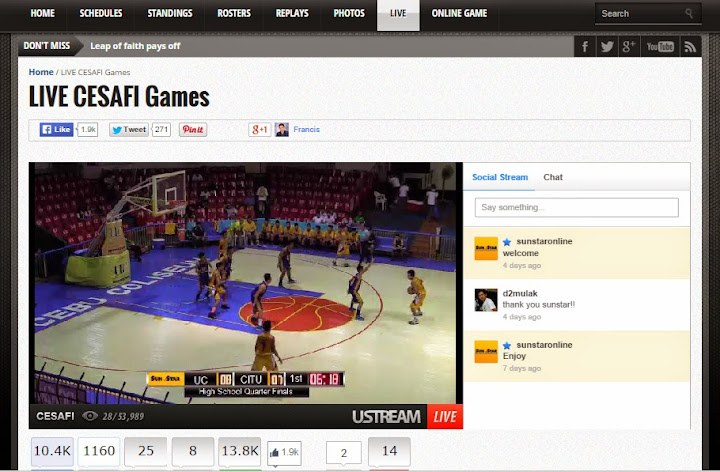 Screenshot of Cesafi microsite
Another addition to this year's coverage are the two brand new Sony high definition video cameras that give better quality videos. With these, two angles can now be used to provide different perspectives of the game.

With the eliminations now over and the knockout stage starting to unfold, Sun.Star will again have a commentator to provide full court-to-court account and add dimension to the coverage.

Sun.Star continues to provide its viewers, both local and abroad, a taste of the action in the Cesafi, as Cebu continues to produce the next basketball stars like Ramon Fernandez of the University of San Carlos and Gilas Pilipinas bigman June Mar Fajardo of the University of Cebu to name a few. (Buen Josef C. Andrade/Sunnex)
style="display:block; text-align:center;"
data-ad-layout="in-article"
data-ad-format="fluid"
data-ad-client="ca-pub-2836569479021745"
data-ad-slot="1977900730">