14 dengue deaths in Cebu in January-May

CEBU CITY -- At least 14 people in Cebu province have died due to dengue fever, and a steady rise in the number of cases has been reported by the Department of Health (DOH), said officials Friday.

Data provided by the Provincial Health Office (PHO) show that 1,594 cases of dengue have been recorded from January to May this year. Toledo City recorded the highest number of cases with 223, followed by Balamban with 193 and Liloan with 164.

Bogo has 96 dengue fever cases, but with four deaths, the highest so far in the province. 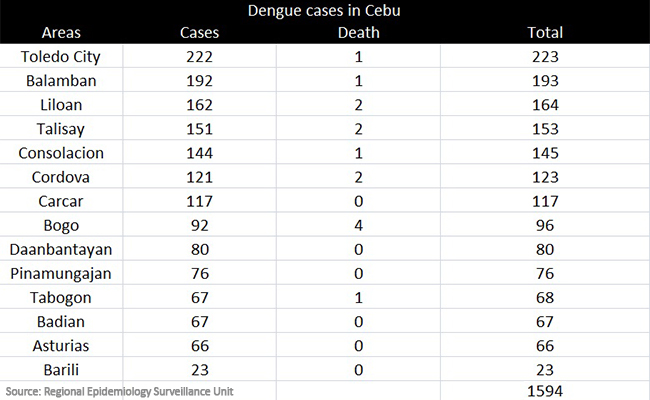 "Dengue cases are present whole year round but it's higher during rainy season based on data since mosquitoes breed in containers or areas that have water. However, during summer, people tend to store water through containers, so cases are still present though not that high compared to rainy days," said Michelle Acosta, DOH-Central Visayas dengue program director, in a text message.

To minimize harm, a school-based mass dengue vaccination will soon be conducted, but this is still being worked on by the DOH, said Dr. Wilson Anthony Egos, Medical Officer 4 for communicable and non-communicable diseases.

Misting operations and larvicidal activities are also conducted all year round to prevent the growth of dengue-carrying mosquitoes, said the PHO.

The health office has also listed diarrhea and cholera as illnesses to watch out for in the coming rainy days.

Toledo City Department of Health Liloan dengue fever Balamban SunStar Interns
View Comments
Disclaimer
SunStar website welcomes friendly debate, but comments posted on this site do not necessarily reflect the views of the SunStar management and its affiliates. SunStar reserves the right to delete, reproduce, or modify comments posted here without notice. Posts that are inappropriate will automatically be deleted.
Forum Rules
Do not use obscenity. Some words have been banned. Stick to the topic. Do not veer away from the discussion. Be coherent. Do not shout or use CAPITAL LETTERS!
Trending