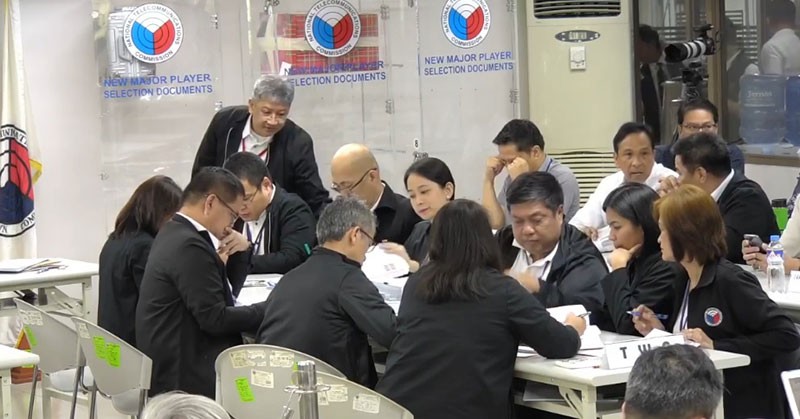 MANILA. The Technical Working Group evaluates the selection documents of three bidders for the new major player in the telecommunications industry on Wednesday, November 7, 2018. (Photo grabbed from DICT Facebook)

The Department of Information and Communications Technology (DICT) said Mislatel will be subjected to the Document Verification Phase.

Acting Information and Communications Technology Secretary Eliseo Rio Jr. said two other bidders, which are set to file a motion for reconsideration within three days, may still win over Mislatel depending on the commitments that they would offer.

Their bids would be re-assessed if their respective motions for reconsideration were granted.

But Rio also said Mislatel can challenge the possible changes on the selection of the provisional third major player in the telecommunications market.

"We have a provisional player now. Well, we have to wait for that kung ano ang mangyayari kasi provisional naman (what will happen next since it is just provisional)," he said.

"If one of the motion for reconsideration will be granted, then bubuksan yung kanilang bids (their bis will be re-opened). And if turns out na mas better yung commitment nila kaysa sa Udenna, then yun, it will be [replacing Mislatel]. But of course Udenna can complain [if there will be changes on the decision]," Rio added. Udenna is the parent company of Chelsea Logistics.

Sear Telecom-Tier1 Consortium and the Philippine Telegraph and Telephone Corporation (PT&T) were disqualified during the preliminary evaluation of selection documents on Wednesday, November 7.

Sear-Tier1, which includes the LCS Group of Companies of Ilocos businessman and politician Luis "Chavit" Singson, was disqualified for failure to submit the P700-million participation security.

On the other hand, PT&T was disqualified for failing to submit a Certification of Technical Capability from the NTC, which requires bidders to have 10 years experience as telecommunications provider on a national scale.

Mislatel was the only bidder that underwent detailed evaluation on Wednesday, November 7, at the NTC. At the end of the day, the selection committee declared it as the provisional new major player (NMP).

The committee said Mislatel was able to earn the final bid rating of 456.80 points.

The group vowed to provide a minimum internet speed of 5 mbps (megabits per second) and maximum of 55 mbps in the next five years.

In a statement, Mislatel it was grateful for having been chosen.

"While the consortium awaits the NMP confirmation from the NTC Selection Committee, it is no less grateful to the NTC for carefully reviewing all the entries and presenting a historic opportunity to provide the best telecommunications services that Filipinos have been aspiring for," it said.

The DICT chief said Mislatel's selection is good for the country.

"The purpose of selecting a third player is to come up with a viable competitor to Globe and Smart." he said.

"The reason why Globe and Smart are surviving right now is because of their foreign partners. The foreign partner is really very important for a telco to operate in the Philippines," he added.

Rio said the rejection of the two telecommunication companies' bids was not the government's fault.

"It’s not the government’s fault that only a lone contender was left. They satisfied the requirements, that’s why they passed the process. The losers will call the process everything, but I think it is still valid and successful," Rio said.

Under the guidelines for the selection process, the two other bidders have three calendar days within which to file a motion for reconsideration. Representatives of both groups have signified their intention to file such motion.

The third major telecommunications player was selected nearly two months after President Rodrigo Duterte insisted that the new player should be picked by late October or early November.

To recall, Duterte offered China in November 2017 to enter the telecommunications sector and challenge the dominance of PLDT and Globe.

On April 6, Duterte signed Administrative Order 11, creating an oversight committee that would ensure that the selection of the new telecommunications player will be done in an "integrated and transparent manner."

The oversight committee announced on July 20 that the new major player would be selected using the Highest Committed Level of Services (HCLOS) selection model.

During his third State of the Nation Address on July 23, the President said third key player in the coutry's telecommunications industry should be "reliable, inexpensive, and secure."

The new telecommunications player's performance security should always be maintained at 10 percent of the remaining cumulative capital and operational expenditures commitments for five-year commitment period.

Duterte had initially wanted the third major telecommunications player to be operational by March this year, but this was not fulfilled because the Department of Informations and Communications Technology (DICT) sought to attract more investors. (SunStar Philippines)