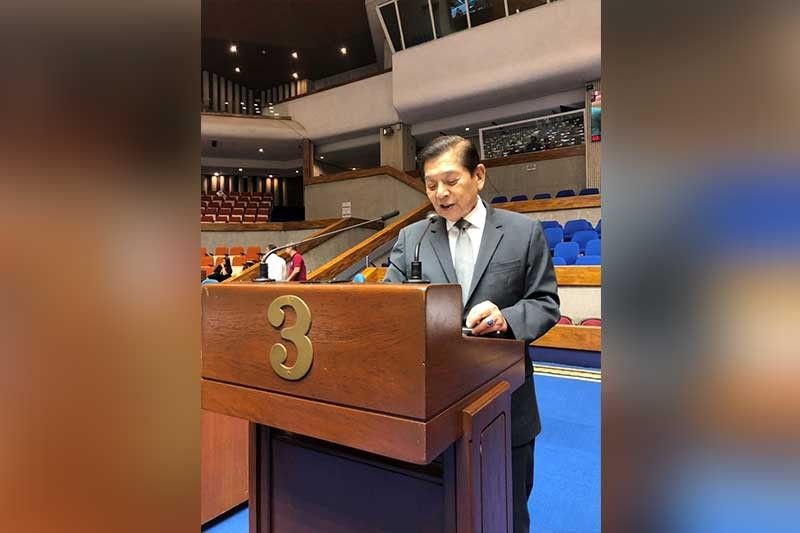 SEARCHING FOR ANSWERS. Rep. Raul del Mar (Cebu City, north district) delivers a privilege speech at the Batasang Pambansa in Quezon City on Tuesday, Aug. 27, 2019, pushing for a House inquiry so the Department of Transportation and the National Economic and Development Authority can explain why they shortened the dedicated bus rapid transit route from 23 kilometers to 13 kilometers. (Contributed Photo)

REPRESENTATIVE Raul del Mar has raised before Congress the decision of two national government agencies to cut the dedicated route of the Cebu bus rapid transit (BRT) by 50 percent and realigned it to areas where there is less commute.

He also pushed for a House hearing for the Department of Transportation (DOTr) and the National Economic and Development Authority (Neda) to shed light on why they shortened the dedicated BRT route from 23 kilometers to 13 kilometers.

The congressman of Cebu City’s north district delivered a privilege speech on Tuesday, Aug. 27, 2019 expressing his concern about the realignment of the Cebu BRT, which he said “may prove to be of great detriment” to Cebu City.

The shortened route covers non-residential areas where there is less commute, which del Mar said defeats the purpose of the BRT—to provide the commuting public with a faster and better mode of transport.

The original route was drawn along the corridors between Bulacao and Talamban, where more people live but work or study in the central business district, del Mar said.

This is “where BRT is mostly needed,” he said in his privilege speech.

“The only entities that benefit from this arrangement are corporations that do business in one or both sides of the new route. And these entrepreneurs want the people of Talamban and Bulacao to continue riding jeepneys and transfer to the BRT when the BRT was planned to provide them continuous uninterrupted service in the first place,” del Mar said.

The legislator further said, “Something is clearly out of sync here, Mr. Speaker.”

The realignment of the BRT route was announced during a media briefing last July 18 in Cebu City by Presidential Assistant for the Visayas Michael Dino, who had said that the originally proposed N. Bacalso Ave. route would no longer be feasible because accommodating this strip would raise the project cost.

The BRT route would now be realigned to the South Road Properties (SRP) then to the Cebu IT Park in Lahug, said Dino.

The realignment came after meetings of Dino and key officials from the DOTr with French engineering firm Egis Group, the consultant for Cebu’s integrated transport plan.

Del Mar said that because of the nature of the funding of the Cebu BRT, any change in the scope and cost need a reevaluation of Neda, “which we have not heard or read being done.”

“It was splashed all over the news media in Cebu and yet there is no record of any ICC approval being presented or reported. Was there really an official approval?” Del Mar asked.

The Cebu BRT is funded by Official Development Assistance (ODA), was “duly approved (twice!)” by the Investment Coordinating Committee (ICC) of Neda, and has existing loan agreements with the World Bank-IBRD (International Bank for Reconstruction and Development), the Clean Technology Fund (CTF) and the Agence Française de Développement (AFD), he said.

Cebu BRT’s project cost zoomed from P10 billion to P16 billion because of road right of way (RROW) acquisition concerns. The Neda-ICC reviewed and reevaluated the project because of the change in its scope and cost.

The congressman said “a Neda-approved project with loan agreements cannot be simply and unilaterally changed, not without the corresponding re-evaluation and approval of ICC and Neda.”

Del Mar gave recommendations that involve the House committee on transportation to do the following:

1. Call for a hearing and invite the DOTr and Neda to explain the shortening of the dedicated route.

2. Inquire from the Neda-ICC whether the ICC has approved the revision of the scope and cost of the Cebu BRT “as announced in Cebu.”

3. Inquire from the Department of Finance and Neda whether they agree to the changes and corresponding amendments of the loan agreements with WB-IBRD, CTF and AFD, and whether these loans have been amended.

4. Ask the DOTr to reconsider its decision, if the changes have not been finalized, and implement the Cebu BRT as originally designed and approved.

5. Appeal to the DOTr to implement the bill for the construction of the Light Rail Transit (LRT), Mass Rapid Transit (MRT) or monorail, and the bills to build a subway under and a skyway over the three most congested road sections in the north district of Cebu City. (MPS)