3 foreigners with Covid-19 'may have caught virus outside PH' 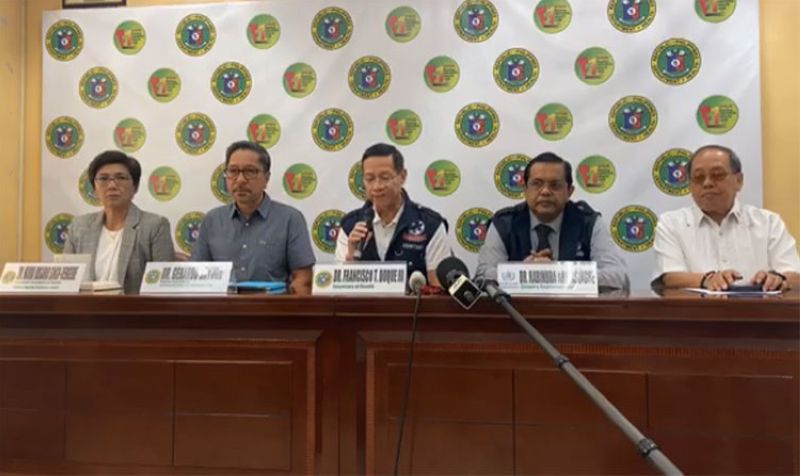 MANILA. The Department of Health holds a press conference to give updates on Covid-19 cases in the Philippines Friday, March 6, 2020. (Screenshot from DOH video)

THE Department of Health (DOH) confirmed that three foreign nationals who had history of travel to the Philippines have tested positive for coronavirus disease (Covid-19), but said they could have contracted the virus from another country.

He said the Taiwanese developed abdominal discomfort and diarrhea on March 2, and experienced sore throat, fever, and malaise on March 3.

The patient consulted at an outpatient clinic in Taiwan on March 4, and was confirmed positive for Covid-19 on March 5.

"The onset of symptoms on March 2 points to possible infection before the patient traveled to the Philippines," said Duque.

The second case involved a 44-year-old Japanese male, who visited the Philippines from February 21 to 28.

But prior to visiting the Philippines, the Japanese had also traveled to Cambodia, Vietnam, Thailand, and Japan.

He stayed at three different hotels during his visit to Metro Manila, before flying back to Thailand last February 28, said Duque.

The patient experienced cough, shortness of breath, and fever on February 29 and consulted a clinic in Cambodia on March 3, where he was referred to a hospital with no tests done. He, then, flew back to Japan last March 4 and was tested positive for Covid-19.

The patient was admitted and is still in isolation at Aichi Prefecture Hospital.

"The extensive travel history of the patient suggests possible contraction of the disease in another country," said Duque.

The third case is a female, reportedly in her 60s and is living in Sydney, Australia, who attended a wedding in Manila on February 13 and visited Pangasinan for a reunion.

The patient left the Philippines for Sydney on March 2, and was confirmed with Covid-19 by the New South Wales Government on March 3.

"As for this case, the DOH is still verifying information with the International Health Regulation National Focal Point Australia," said Duque.

READ: Woman from PH tests positive for Covid-19 in Australia

World Health Organization Representative to the Philippines Dr. Rabindra Abeyasinghe seconded Duque, saying circumstances, particularly those of the Taiwanese and Japanese, indicate the possibility of the virus coming from another country.

"We recognize that the incubation phase of the disease is known to be two to 14 days. But in the majority of the cases, its six to seven days. So it's very likely that this person got infected before or during travel to Philippines. So the timeline points to possible earlier infection," said Abeyasinghe in reference to the Taiwanese.

"That person was traveling extensively between many countries for occupational reasons. So it becomes difficult to localize and say just that because that person was in the Philippines, he got infected in the Philippines. We need to recognize that he spent several days in Vietnam, Thailand, and he has been going in and out of Japan also. Infection could have actually happened in any of these countries," he added.

DOH Assistant Secretary Maria Rosario Vergeire, for her part, said they have also started the process of contact tracing for those that had come in contact with the three foreigners.

"We have three foreign nationals who are back in their country already. We will just trace back the places they went to and the people they have been with. We will have different situations but, definitely, the standard protocols will still be the same," she said.

The DOH has reported five confirmed cases of Covid-19 in the Philippines. Of the five cases, one died due to severe pneumonia.

The latest positive cases involved a 48-year-old and 62-year-old Filipinos, both male, who are now admitted and isolated at the Research Institute for Tropical Medicine.

The first three confirmed cases were Chinese nationals, one of them died. (HDT/SunStar Philippines)