Classes, work suspended in some areas in Luzon due to typhoon 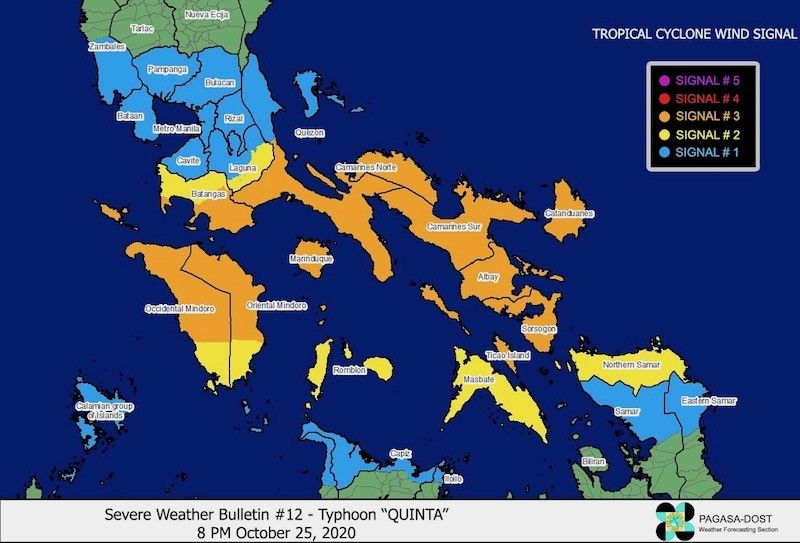 SEVERAL local government units (LGUs) in Luzon have suspended classes in all levels as well as work in government offices on Monday, October 26, 2020, to address the impact of Typhoon Quinta (Molave).

The provinces of Albay, Cavite, Camarines Sur, Rizal, Oriental Mindoro and Occidental Mindoro as well as the cities of Manila, Mandaluyong and San Juan in Metro Manila, Biñan and Sta. Rosa in Laguna, Lucena in Quezon province and Naga City in Camarines Sur announced the suspension of classes, including asynchronous sessions, in both public and private schools.

The provinces of Camarines Sur, Sorsogon, Romblon, Marinduque and Batangas, and the cities of Lucena City suspended work in government offices only, except those that provide frontline services.

Typhoon Quinta was traversing southern Luzon Sunday night, October 25, after hitting land twice in Albay with maximum sustained winds of 130 kilometers per hour (kph) near the center and gustiness of up to 180 kph. It is moving westward at 25 kph.

The typhoon made its first landfall at 6:10 p.m. over San Miguel Island in Tabaco City, Albay and the second at 6:50 p.m. in the vicinity of Malinao town, also in Albay.

Ahead of the typhoon’s landfall, 2,407 families or 8,939 persons were evacuated in Bicol region, according to the Office of Civil Defense regional office.

As of 5 p.m. Sunday, OCD-5 said 1,461 families or 5,518 persons were in evacuation centers while 946 families or 3,421 persons have sought shelter with relatives. (Marites Villamor-Ilano/SunStar Philippines)