Only the President can use profanity, Palace says 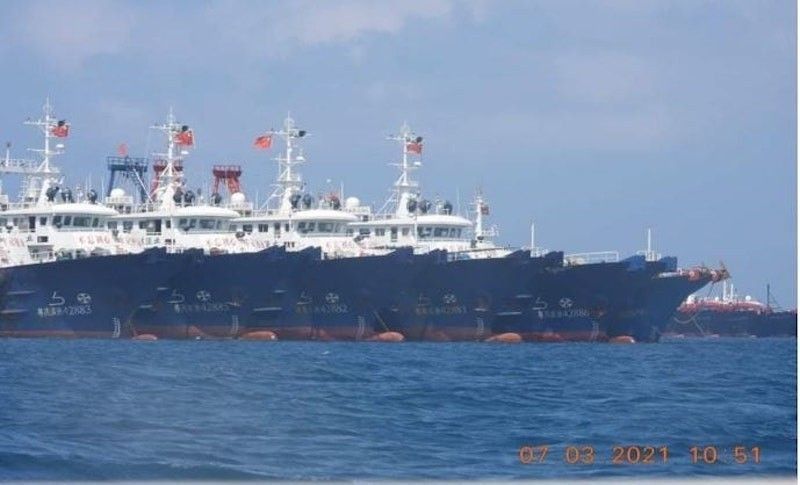 (UPDATED) In the wake of an offensive social post by Foreign Secretary Teodoro Locsin Jr. against China, Malacañang on Tuesday, May 4, 2021, clarified that the Philippines will continue to use diplomacy in trying to resolve the territorial dispute over the West Philippine Sea.

Presidential Spokesperson Harry Roque Jr. said President Rodrigo Duterte has told members of his Cabinet that there is no need to be rude or disrespectful.

Duterte, in his televised briefing Monday evening, noted that China is a benefactor.

“Just because we have a conflict with China does not mean to say that we have to be rude and disrespectful. As a matter of fact, we have many things to thank China for the help in the past and itong mga tulong nila ngayon,” Duterte said.

He said he has never promised to “retake the West Philippine Sea.”

“I never, never in my campaign as president promised the people that I would retake the West Philippine Sea. I did not promise that I would pressure China. I never mentioned about China and the Philippines in my campaign because that was a very serious matter,” he said, as he ranted against former Supreme Court justice Antonio Carpio and former Foreign Affairs secretary Albert del Rosario.

During the 2016 presidential campaign, Duterte was quoted as saying he will ride on a jet ski and plant the Philippine flag on an island in the West Philippine Sea to assert the Philippines' sovereign rights over the area.

In 2018, Malacañang floated the idea of Duterte riding a jet ski to the Philippine Rise, a 13-million-hectare undersea area that is part of the country's continental shelf. He was instead represented by his youngest son Sebastian Duterte.

In his press conference Tuesday, Roque said Locsin had told him that his tweet was his personal opinion and that he had apologized.

Locsin had tweeted, “China, my friend, how politely can I put it? Let me see... O...GET THE F#$K OUT. What are you doing to our friendship? You. Not us. We’re trying. You. You’re like an ugly oaf forcing your attentions on a handsome guy who wants to be a friend; not to father a Chinese province.”

“I won’t plead the last provocation as an excuse for losing it; but if Wang Yi is following Twitter then I’m sorry for hurting his feelings but his alone. It’s been my elusive dream to copy until I attain in mind and manner the elegance of Wang Yi. His opinion alone matters. He mentored me in my Myanmar understanding and response. I went to China to get his advice before the Asean leaders summit and followed it to the letter,” Locsin said.

Locsin, who is active on Twitter, made the post in question shortly after the Department of Foreign Affairs (DFA) issued a statement Monday, May 3, that it has protested the actions of the Chinese Coast Guard (CCG) in the West Philippine Sea.

The DFA said the CCG shadowed, blocked and issued radio challenges to the Philippine Coast Guard (PCG) vessels conducting legitimate maritime patrols and training exercises in the vicinity of Bajo de Masinloc on April 24 to 25, 2021.

Bajo de Masinloc, or Scarborough Shoal, lies within the West Philippine Sea, but is claimed by China based on its nine-dash line. The Permanent Court of Arbitration on July 12, 2016 rejected China’s claims and upheld the Philippine’s sovereign rights over the area.

China, however, has refused to acknowledge the arbitration ruling and has continued its incursions into the West Philippine Sea, as indicated by the presence of over 200 Chinese vessels near the Julian Felipe Reef in March 2021.

On March 23, 2021, the DFA demanded that China withdraw the vessels. A series of diplomatic protests have been filed since then.

Roque said the government will continue to employ diplomacy in protecting Philippine severeignty.

(Diplomacy is not appeasement. It is a form of warfare without bloodshed. Employing peaceful means to resolve a dispute is not a form of subjugation. It is a dignified approach to protecting national interest and upholding international law.)

He reiterated that the dispute will not define bilateral relations with China nor hinder friendship between the two nations, and cooperation in pandemic response, vaccines and post-pandemic efforts.

Aside from donating one million doses of the Sinovac vaccine, China has also made various donations of personal protective equipment, test kits and ventilators. Roque recalled that China had also dispatched a medical team to the Philippines.

Roque also listed seven projects with a combined cost of nearly P118 billion, which are being undertaken with official development assistance from China.

He also cited various donations amounting to US$10.89 million in cash and in kind, mostly to disaster victims in the Philippines.

Roque further cited US$77.38 million worth of economic and technical cooperation agreements signed in January 2021, which may be used for Covid-19 response.

Duterte has received his first dose of the Sinopharm vaccine, the same vaccine that was administered to Presidential Security Group (PSG) personnel in 2020 despite the absence of emergency use authorization from the Food and Drug Administration. (Marites Villamor-Ilano / SunStar Philippines)