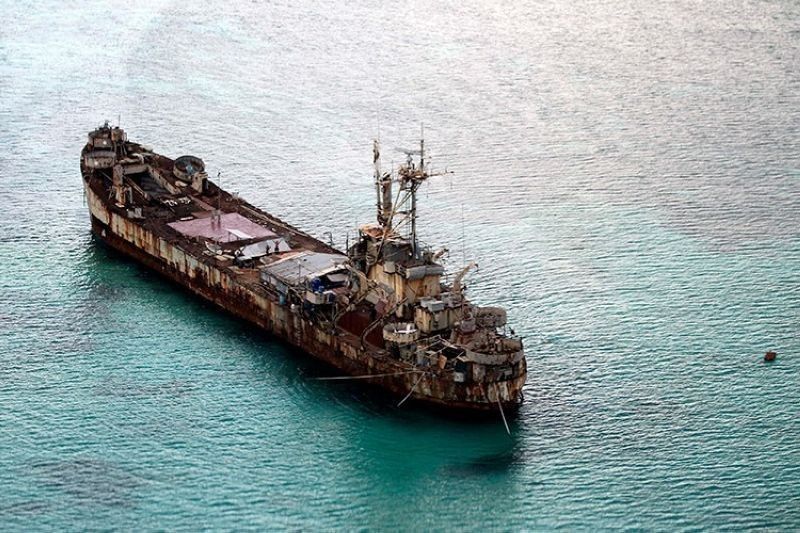 MANILA. This areral photo taken through a glass window of a military plane shows the dilapidated Sierra Madre ship of the Philippine Navy anchored near Ayungin Shoal with Filipino soldiers onboard to secure perimeter in the Spratly Islands in the South China Sea on May 11, 2015. (AP)

DEFENSE Secretary Delfin Lorenzana said Thursday, November 25, that China is actually trespassing in the Ayungin Shoal, noting that the area lies within the Philippines’ exclusive economic zone (EEZ) where the country has sovereign rights.

Lorenzana’s statement came after China demanded for the removal of the military ship BRP Sierra Madre from the Ayungin Shoal (Second Thomas Shoal).

The BRP Sierra Madre has been grounded at Ayungin Shoal since 1999.

“Ayungin Shoal lies within our EEZ where we have sovereign rights. Our EEZ was awarded to us by the 1982 Unclos which China ratified. China should abide by its international obligations that it is part of,” Lorenzana said.

He also cited the 2016 Arbitral award, which ruled that the territorial claim of China has no historic nor legal basis.

“Ergo, we can do whatever we want there and it is they who are actually trespassing,” he said.

(We have two documents that prove we have sovereign rights over areas in our EEZ, while China has none and their claim has no basis.)

Lorenzana also said that the incident last November 16, when three Chinese vessels blocked and water cannoned a Philippine vessel while it was on its way to deliver supplies to the troops in Ayungin Shoal, was “an affront to the Filipino people.”

“I have told the Chinese ambassador that that no one can prevent us from doing what we have to lawfully do within the west Philippine Sea, an area where we have sovereign rights by international laws,” he said.

On Wednesday, November 24, the Philippine Navy successfully transported food supplies to the Filipino forces onboard the BRP Sierra Madre in the Ayungin Shoal.

“Two Philippine Navy resupply boats arrived at the Sierra Madre in the Ayungin shoal at 11 a.m. without any untoward incident,” said Lorenzana on Wednesday.

He said, however, that while the Philippine Navy personnel were unloading supplies from the boats, a Chinese coast guard ship deployed a rubber boat with three personnel who took pictures and video of the delivery.

“I have communicated to the Chinese ambassador that we consider these acts as a form of intimidation and harassment,” he said.

The supply boats reached the shoal without a Philippine military escort in accordance with a request by China’s ambassador to Manila who assured Lorenzana over the weekend that the boats would not be blocked again, the defense chief said.

But a Philippine military plane flew over as the supply boats arrived around noon at the remote shoal, which has been surrounded by Chinese surveillance ships in a years-long territorial standoff. A Philippine coast guard ship also patrolled the waters a few kilometers (miles) away and military officials in their headquarters in Manila closely monitored the 30-hour journey of the supply boats, officials said.

The Philippines said the shoal is in its internationally recognized exclusive economic zone, but China insists it has sovereignty over the waters and has the right to defend it.

Foreign Secretary Teodoro Locsin Jr. warned China that the supply boats are covered by a mutual defense treaty with the United States.

Washington later said it was standing by the Philippines “in the face of this escalation that directly threatens regional peace and stability,” and reiterated “that an armed attack on Philippine public vessels in the South China Sea would invoke US mutual defense commitments” under the 1951 US-Philippines Mutual Defense Treaty.

Duterte, who has nurtured close ties with China, did not comment on China’s action until Monday, November 22, when he raised the issue at a meeting of leaders of the Association of Southeast Asian Nations and China.

“We abhor the recent event in the Ayungin Shoal and view with grave concern other similar developments,” Duterte said, using the Philippine name for the shoal. “This does not speak well of the relations between our nations and our partnership.”

Xi did not respond directly to Duterte’s remarks but gave an assurance that China will not bully its smaller neighbors or seek dominance over Southeast Asia, diplomats told The Associated Press.

China’s increasingly assertive acts in the disputed waters have been protested by coastal states, including by the Philippines, Vietnam, Malaysia and Indonesia.

It was the latest flareup in long-simmering disputes in the strategic waterway, where China, the Philippines, Vietnam, Malaysia, Brunei and Taiwan have overlapping claims. China has transformed seven shoals into missile-protected island bases to cement its assertions, ratcheting up tensions. (LMY/With AP)